This post is my attempt to explain one of my parkour experiences with words, to try and convey what goes on inside my head when I did a particular jump.

Standing two metres high on top of a wall, I glance down to the ground below me, and then rub my hands on my thighs as if to rub them clean. I crouch down, looking across at a window ledge on the other side of the alleyway. My heart is pounding and my hands are shaking, not unnoticeably, from fear. There's an empty sick feeling in the upper part of my stomach.

I climb down from the wall again, angry at myself. Worse; disappointed.

I walk across the alleyway to the ledge, jump up and grab it. Hanging onto it, I pull myself up to test the grip, then check where my feet are against the wall, then spring up into the air and land on the ground. I do this a second time.

I hear myself say to Nikolay, my training buddy of the night who is waiting patiently underneath, that I know I can do it. And I do know it. The distance is comfortable. The height, though at a couple of metres off the ground, is not a physical problem. I can easily take the drop without risk of injury. The techniques have been practised more than enough to be instinctive: my feet will hit the wall first to take the impact and stop the wall slamming into me, to give my hands time to grab on, and to rotate my body so that my legs are below me incase I fall to the ground. I know that in the air, I'll first look at the wall and then concentrate on the ledge for my hands to grab.

The knowledge should be comforting, but fear isn't always a rational emotion. I wouldn't consider doing the jump if I thought there was a risk.

"I've got it this time", I say as I climb back up the first wall, bouncing up it with unconscious ease. Heart pounding, hands quavering, and feeling sick, I look towards the wall again. Two metres off the ground, it's scary again. I stare intently at the ledge, then crouch again to look across. Crouching means a different angle to help gauge the distances, means that it doesn't look as high, and because the ledge is only in line with my waist, I'll have to take off half from a crouch anyway.

Two minutes pass. Apart from some more crouching, mumbling and rubbing off hands on legs, nothing has changed. I climb down again, frustrated and defeated. A feeling of worthlessness comes over me. Physically, this is nothing difficult, and if I can't do something that's easy then what can I do? I'm filled with an odd mixture of frustration and despair.

It's about ten minutes since I started. I've been up and down the wall at least five times, and at least three people have walked past. I imagine that Nikolay and two others with us are bored. When I first climbed up, I knew that I had a small window of opportunity which I should use, before the wait and excess thinking built up a fear that this jump doesn't deserve. But I waited too long, the window passed and the fear grew.

I climb up the wall for a sixth time, again with a positive comment which, as the cliche goes, was clearly more to reassure me than anybody else. It's irrelevant if anyone else believes I can or will do it, we'll find out soon enough.

There's a point of no return with jumps. Now that I've leaned forward, I'm leaving this wall one way or another. It's dangerous to get to this point without the focus, as any mental dithering can cause something to go wrong: half-committing to something means you compromise the movement, and in this case would mean, at best, jumping safely down to the floor, or at worst, crashing into the wall opposite. Any habit of bailing midway is dangerous, but thankfully there's no possibility of that here.

Intensely focussed, time dilates slightly and my awareness heightens. My eyes narrow at the ledge; my arms start to swing to balance me and help tip forward; I can sense the corner of the wall beneath my feet as I keep grip. Crouching and tipping, I explode into the jump. My feet hit the wall and bounce slightly, then my hands catch the top of the ledge. My face is stopped from colliding with the ledge half a foot in front of it. Half a second later, my right hand slides down the sloped plastic ledge and I drop to the ground.

I tried the jump but didn't quite manage it.

Nikolay claps a couple of times. I feel a weird mixture of emotions. Relief and the happiness of success - in actually attempting the jump - flood warmly, but also with some frustration. Not just that I didn't manage it completely - overcoming the mental barrier was much more important - but that it was easy and I wasted so much time building up to it.

Grinning, I climb back up to the first wall. The second jump I usually find scarier and my hands are still shaking, but the experience from the first attempt makes it feel safer. Half a minute later, I jump again, and this time I end up hanging on the ledge. We call this cat position (or cat grab)1, hands on a ledge and feet against a wall, as that's what cats look like halfway through climbing up onto something.

I drop down again. Happiness spreads, but so does the adrenaline. Oddly, there's more adrenaline after the jump and I feel more scared, though there's no target of the fear. The sick feeling in my stomach is joined by warmth and I just want to sit down and hug myself. It's a strange feeling.

"Once is never", I say to Nik. The adage means that doing something only once is so insignificant that it may as well not count. I promise to do the jump three times.

The three jumps are over within a minute, once I drag myself out of my emotionally raw state. The focus is still there and the fear not completely gone, but the mental barrier is smashed. Broken. After the third, I decide I'd like a picture of it, and get Nikolay to stand down the alleyway with the camera pointing towards me. The camera is just an iPhone and the method is taking a video from which to extract a still. The quality of the picture isn't great, but it's the meaning behind it which is important. The success felt from the jump, from facing up to what built up to be a huge fear, is great, and has stayed with me for a couple of weeks.

This is what we call Breaking a Jump in Parkour: doing something which is mentally intimidating (sometimes because of physical intimidation, othertimes not), and the repeated facing of fear is a key part of parkour practice, one of the things that makes it stand out from other sport practices to me. From it we learn ourselves better, sharpen our mental aspect, and really see where our abilities stand. 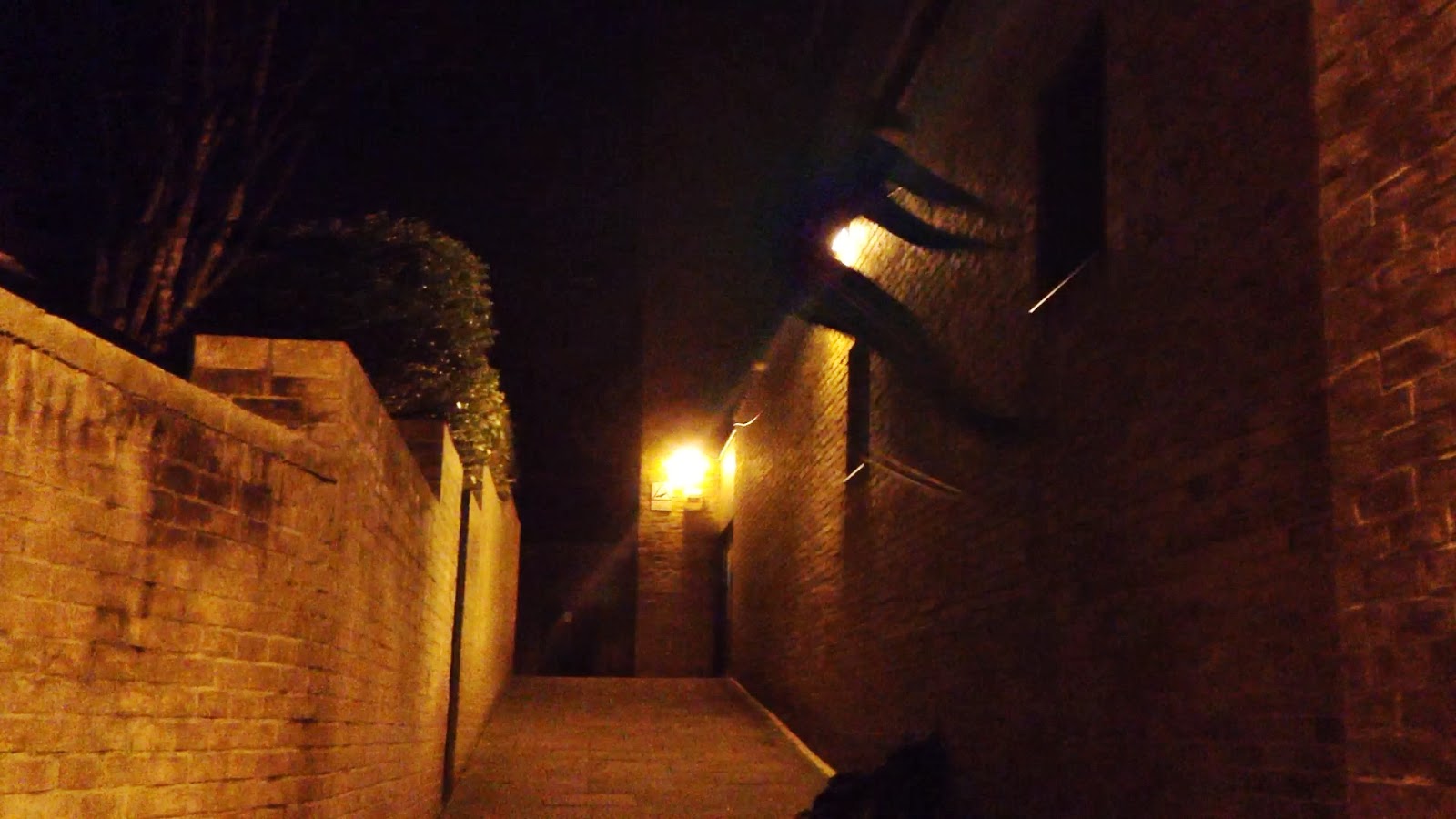 If you're interested more about fear in everyday life and parkour, here's a podcast I recommend - download it and listen to it on a train or walk sometime. There's also a post here written by a very experienced practitioner, though it's aimed at practitioners it should still be interesting. I find it hugely rewarding to challenge myself mentally and the experience is great for learning how to deal with your emotions. Also, doing this jump seems to be a slight turning point for my parkour: before it, I was low on confidence and didn't feel I could do much, but now I'm able to do a lot more - today I did a jump which, rationally, should be scarier than this one, but it took me less than a couple of minutes to do.

1 I've heard this was based on a confusion with french though. The french names saut de chat and saut de bras mean (unless I'm mistaken), meaning cat-jump and arm-jump, got confused by some of the early english practitioners. Cat-jump being cat-pass, or kong/monkey, arm-jump also known as cat leap like I was doing here.
Posted by Alex May at 13:02 No comments: